If you’ve come across this article, you’ve probably noticed it’s from 2013 (in case the gratuitous science cat memes didn’t tip you off to that first). You may also be wondering if, eight years later, I still use this process, because there’s no better test of a process than it’s efficacy over time.

Well… I do. Not only that, but this process has turned me into a plotter. That’s right, about six years ago, I handed in my “pantser” card, because viewing my work through these logical steps got me where I wanted to go quicker and better. Around 30% of my stories still unfold in a discovery process as I write, but the core structure and most of the main plot points are there for me when I start.

This is especially key for a writer like me who can’t stick to just one or two MCs. All my books have ensembles. 10-20 or more POV characters, and just as many storylines to keep straight.

I’ve used this process, in different iterations, on every single one.

I’ve refined this process some over the years. It was never meant to be perfect, only a concept that could help take your idea from “hey, cool,” to something workable, and more importantly, finish-able. If you were one of those who adapted this concept, I’d love to know if, years later, you still find it successful as well.

These days I also think of this process as blossoming. The more I discover in the act of dividing (mitosis), the more I learn… the more I see new ideas take shape and become part of the whole picture. Having a great brainstorm partner helps add even more color to this process.

I’ll let you read on, and decide if this can help you as well.

I have always had a love-hate relationship with outlining. On one hand, my writing is more focused and precise when I use one. Editing is certainly easier. On the other hand, it can be disruptive to my creative process. When I start writing something, I often only have a vague idea and a character or three to start. I rarely ever know all the meat and bones of the story going into it. The process of writing for me is also a process of exploration, and I love letting the story unfold naturally. It’s how my brain works. I know its how the brains of many “pantser” writers work as well.

So, for me at least, the hardest part of outlining is going from a vague idea with a few general plot points, to a detailed chapter-by-chapter sequence of specific events. For me, it feels very “cart before the horse,” and it squelches that lovely story unfolding process thingy (technical term right there) that I described. But I knew my writing would benefit from outlines, and so, stubborn as I am, I was determined to find an approach to outlining that worked for someone with a brain like mine.

I’ll stop here for a moment and add a, perhaps obvious, but necessary disclaimer: Being as I suck at outlining, I make no promises on whether this method will or will not work for you. Far more qualified people than I have produced tips on this topic that are likely also far more useful. But, from one sucky outliner to another: this DOES work for me, and it works for me BECAUSE I suck at outlining. So, voodoo logic states that it might (might) for you too. Abandon only some hope, ye who enter here.

So, how do you create something from nothing? Well, you start with what you DO know and then you break that into manageable parts…and then you do it again…and again…until you have an outline. Think of it like mitosis, otherwise known as cell division. One becomes two, two becomes four, four becomes eight, and so on. Each piece you break apart gives you more information and data than you had with the piece before it, while still containing valuable information relative to the previous parts. Of course, when you piece it all together, you will benefit from the principal of gestalt…which says, essentially, that the sum of the parts is greater than the total of the individual parts. (Example: three drivers in separate cars cannot use the carpool lane and thus are stuck in traffic…however three drivers in the same car can, and will laugh at everyone sitting in traffic).

If you’re still reading this after all this rambling, let me tell you how I have learned to outline.

You start with your main idea. That’s all you need to begin. I apologize but you will need at least that much; if you don’t have a single thought on what you want to write about, I recommend visiting NaNoWriMo’s Adoption Forum.

Let’s use Harry Potter as our example. We know we want to write a book about a child who learns he is a wizard and is sent off to a wizarding school where he learns more about who he is and runs into several obstacles along the way. That’s a simple idea that we can work with.

Here we are simply going to define the setup, middle, and end of the story at a high level. No detail, just the basics.

So far that wasn’t so bad, right? All we did was define the setup, the main idea, and the ending. So let’s divide some more cells, shall we?

Cell Division Step Two: Divide each of the above three main parts into three sections apiece (for a total of 9)

From here, you are going to break the Beginning, Middle, and End each into three sections. Each of these breakdowns also follows some logical steps: setup, action, conclusion. Sometimes thinking of it in simple terms like that helps to form the ideas.

The idea is to add slightly more detail and definition to each section so that you can (you guessed it) continue to divide them further.

From here, you continue to divide until the ideas grow larger and more specific.

How much deeper you go is up to you. You might decide to stop at Step Two because that’s enough detail to keep you on track. Or you might go further. The concept here is that by starting with a larger idea and slowly breaking it apart, the idea can unfold in a natural way instead of trying to throw random ideas together and make them fit logically. 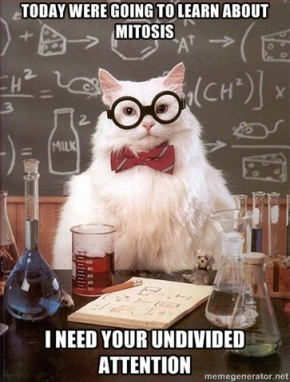 I think it goes without saying that there are many benefits of working from an outline (consistency being not the least of them), but if your outline acts more like a roadblock than a helpful guiding hand, then its time to try something that works. Maybe this will…maybe it won’t…but I’m all about best practice sharing.

Are there any other “pantser” writers out there who have struggled with and overcome their outlining hangups?

20 thoughts on “Mitosis (Or, How to Outline When You Suck at Outlining)”