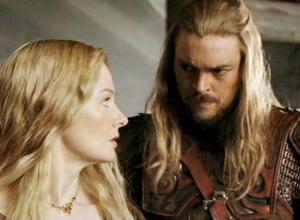 Éowyn and Éomer are two of my favorite characters in Tolkien’s Lord of the Rings. Both continuously act with bravery, nobility, and a genuine passion for their people and way of life, throughout the story. There is a purity of heart and cause for both, and most importantly, they act with a significant regard for each other. Éomer specifically casts a loving and protective shadow over his sister, wanting to keep her safe but loving her for her courage and spirit nonetheless. He fears for her, yet is proud of her.

Éowyn and Éomer are the children of Éomund & Theodwyn, the latter being the sister of King Theoden of Rohan. Both died when the children were very young, Éomund in battle and Theodwyn of an illness not long after, so Theoden raised both children as his own. As such, they grew up in Edoras alongside the kings’s son, Theodred. Later, Theoden would refer to Éowyn as “dearer than daughter,” and would entrust Éomer to the charge of his kingdom.

While Theoden is under the dark influences of Saruman (through Grima Wormtongue), the kingdom slowly falls to the Uruk Hai. Éomer, once considered like a son to the king, is banished under this same dark influence. Despite being banished, he remains loyal to Rohan, attempts to assemble forces to fight Saruman and the orcs.

I serve only the Lord of the Mark, Theoden King, son of Thengel.We do not serve the Power of the Black Land far away, but neither are we yet in open war with him; and if you are fleeing fr

om him, then you had best leave this land. There is trouble now on all our borders, and we are threatened; but we desire only to be free, and to live as we have lived, keeping our own, and serving no foreign lord, good or evil. We welcomed guests kindly in the better days, but in these times the unbidden stranger finds us swift and hard. Come! Who are you? Whom do you serve? At whose command do you hunt Orcs in our land?

When Theodred dies tragically against the Uruk Hai during the War of the Ring, Éomer becomes next in line for the throne of Rohan after Theoden. Through the intervention of Gandalf, Saruman’s power is driven from the king, but the effects on Theoden cannot be completely destroyed with it, and thus it becomes clear to Theoden that he must act quickly to restore the peace to his kingdom.

As the war escalates and the Fellowship came to Edoras, Éomer  and Theodred know they must ride out to Gondor to stop the invading forces. Éowyn, a shieldmaiden with the heart of a soldier, desires to go but her uncle and brother forbid it. She is instead left as ruler of Edoras in their stead, on the suggestion of Háma, who knows that the White Lady of Rohan is much beloved by the people.

After a last desperate plea with Aragorn to allow permission for her to ride to battle with the soldiers is denied, she disguises herself as a man (Dernhelm) and rides with the men to Gondor, and fights upon the Battle of Pelennor Fields. When she witnesses her uncle struck down by the Witch King of Angmar, she stands bravely between them, knowing her life may very well be forfeit with this action. In one of easily the most badass moments of the book and of any fantasy story of all time, she courageously declares:

No living man am I! You look upon a woman! Éowyn I am, Éomund’s daughter. Begone if you be not deathless! For living or dark undead, I will smite you, if you touch him!

She then strikes the head from his beast, and through a distraction from Merry and his magical blade, she is able to thrust her blade clear through the Witch King’s helm, killing him and fulfilling Glorfindel’s ancient prophecy that the Witch King could be killed “not by the hand of a man.”

Of course, this action is not without some consequence…her arm is broken and she is struck by the elusive Black Death, and her near lifeless form on the fields of Pelennor leads to an incredibly touching scenes in the book where Éomer first throws himself at her seemingly dead boy and then, when learning she is alive, proceeds to stay by her side until she is again well.

cried Éomer amid his tears. But she opened her eyes and said: “Éomer! What joy is this? For they said that you were slain. Nay, but that was only the dark voices in my dream. How long have I been dreaming?” “Not long my sister,” said Éomer, “but think no more on it!

While convalescing in the House of Healing, she meets Faramir, the current Steward of Gondor, and eventually they fall in love. Although little attention is given to their courtship, the interactions between the two give us one of the only genuinely innocent and romantic moments of the book.

Then Faramir came and sought her, and once more they stood on the walls together; and he said to her: ‘Eowyn, why do you tarry here, and do not go to the rejoicing in Cormallen beyond Cair Andros, where your brother awaits you?’

But he answered: ‘Two reasons there may be, but which is true, I do not know.’

And she said: ‘I do not wish to play at riddles. Speak plainer!’

‘Then if you will have it so, lady,’ he said: ‘You do not go, because only your brother called for you, and to look on the Lord Arag

orn, Elendil’s heir, in his triumph would now bring you no joy. Or because I do not go, and you desire still to be near me. And maybe for both these reasons, and you yourself cannot choose between them. Eowyn, do you not love me, or will you not?’

‘I wished to be loved by another,’ she answered. ‘But I desire no man’s pity.’

‘That I know,’ he said. ‘You desired to have the love of the Lord Aragorn. Because he was high and puissant, and you wished to have renown and glory and to be lifted far above the mean things that crawl on the earth. And as a great captain may to a young soldier he seemed to you admirable. For so he is, a lord among men, the greatest that now is. But when he gave you only understanding and pity, then you desired to have nothing, unless a brave death in battle. Look at me, Eowyn!’

And Eowyn looked at Faramir long and steadily; and Faramir said: ‘Do not scorn pity that is the gift of a gentle heart, Eowyn! But I do not offer you my pity. For you are a lady high and valiant and have yourself won renown that shall not be forgotten; and you are a lady beautiful, I deem, beyond even the words of the Elven-tongue to tell. And I love you. Once I pitied your sorrow. But now, were you sorrowl

ess, without fear or any lack, were you the blissful Queen of Gondor, still I would love you. Eowyn, do you not love me?’

Then the heart of Eowyn changed, or else at last she understood it. And suddenly her winter passed, and the sun shone on her.

‘I stand in Minas Anor, the Tower of the SUn,’ she said; ‘and behold! the Shadow has departed! I will be a shieldmaiden no longer, nor vie with the great Riders, nor take joy only in the songs of slaying. I will be a healer, and love all things that grow and are not barren.’ And again she looked at Faramir. ‘No longer do I desire to be a queen,’ she said.

Then Faramir laughed merrily. ‘That is well,’ he said; ‘for I am not a king. Yet I will wed with the White Lady of Rohan, if it be her will. And if she will, then let us cross the River and in happier days let us dwell in fair Ithilien and there make a garden. All things will grow with joy there, if the White Lady comes.’

‘Then must I leave my own people, man of Gondor?’ she said. ‘And would you have you proud folk say to you: “There goes a lord who tamed a wild shieldmaiden of the North! Was there no woman of the race of Numenor to choose?” ‘

‘I would,’ said Faramir. And he took her in his arms and kissed her under the sunlit sky, and he cared not that they stood high upon the walls in the sight of many. And many indeed saw them and the light that shone about them as they came down from the walls and went hand in hand to the Houses of Healing.

And to the Warden of the Houses Faramir said: ‘Here is the Lady Eowyn of Rohan, and now she is healed.’

Éomer, on the death of his uncle, is crowned the eighteenth King of Rohan. Due to the friendship and kinship he developed with Aragorn along the way, Éomer renews the Oath of Eorl, swearing partnership and loyalty to the kingdoms of Gondor ever after.

Éowyn marries Faramir, and Aragorn titles Faramir as the Prince of Ithilien as an honorary Steward of Gondor. While there is little said of their life after retiring there (except the birth of a son), I like to think they lived happily ever after.

Of course no good fandom would be complete without cosplay. I dressed as a shieldmaiden of Rohan, a costume based off of one of Éowyn’s, for the premiere of The Hobbit: An Unexpected Journey. My fangirl runs deep!

21 thoughts on “Éowyn and Éomer”