I am thrilled to have had the opportunity to interview one of my favorite authors, Christopher Rice.

Let’s all take a moment of silence for my inner fangirl.

Back on track, I was first turned on to Rice’s work when he released his first novel, A Density of Souls. Like many, I was curious what the son of Anne Rice could bring to the table, and I was not, at all, disappointed. I’ve been an avid reader of his work ever since. You can read my reviews of The Heavens Rise and The Vines, which are easily my two favorites.

In addition to being a talented and prolific writer, he is also the co-host of The Dinner Party Show, an endlessly entertaining live comedy variety show that airs on Sunday nights.

This week, he embarks on the tour for his latest supernatural thriller, The Vines. I’ll be traveling to New Orleans in a few days to participate in Undead Con as a panelist, an event Rice is featured at. I also suspect his mother has a secret plan to crown him as Lestat at the Lestat Coronation Ball on Halloween, and I wouldn’t miss that for all the world.

1. Hey Christopher, first and foremost: Where can we find you online?

2. You’re a rather varied and prolific writer. Tell us about your books.

3. Tell us about the project you are working on now.

4. What does writing preparation look like for you? Do you do full outlines and character profiles, or do you just start with a general idea and write?

I try to make it my first order of business every day, and I work on a lot of projects at once. So sometimes it’s about carving out a few hours later in the day. I find that setting a manageable daily goal, such as 1,000 words a day, makes the entire process easier. 1,000 words a day turns out to be about two to three hours of work. If you stay steady and consistent with that, you won’t overwhelm yourself.

5. Editing is a challenge for many writers. I’d love to hear some of your tips for editing well.

Get your beta readers lined up. The group should include your cheerleader, your toughest critic, a big fan of the genre you’re writing in and your neutral party. Show the manuscript to them first and then process their responses without strangling any of them. With some of the beta readers, you should have questions specific to their little role – genre fan vs. tough critic. But look for the similarities in their critical responses and rewrite based on your response to those. Then, hire an editor if you’re not working with one already. Don’t confuse editing with copyediting and proofreading. The later are the two final stages in the process. But you shouldn’t skimp on any stage of the process.

6. Research is another challenge writers face, but is an important part of the writing process. How do you approach research in your own work?

Yes. But you can only use about 10% of your research and research quickly turns into procrastination. I think it’s great to have a bookshelf devoted to non-fictions books about the world you’re about to write in. But set aside post writing/outlining time to swim in that world.

7. Tell us about your favorite marketing tools.

Social media is where you gather into one place everyone who likes your work. I’m not sure it makes you millions of new fans. But it’s a great organizational tool you can use. In digital publishing, spiking things up bestseller lists as soon as they’re released gets them greater visibility on sites like Amazon. This is the best kind of marketing you can do without breaking your personal piggy bank.

8. Writing across multiple genres likely each present their own challenges. What genre are you writing in now, and what are some tips for writing well in that space?

9. What advice would you give to a writer who is starting out?

The greatest piece of writing advice my mother, Anne Rice, has given me is, “Write the book you want to read.” I couldn’t agree more, and would pass it along to other aspiring writers. 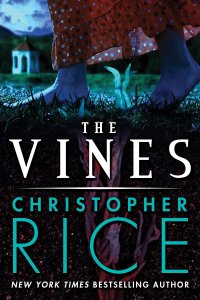 To increase my output to keep pace the new expectations of digital publishing. Readers are hungry for more consistent books set within series universes or interlocking worlds, and that’s my goal for 2015.

11. Finally, is there anything else you’d like readers to know?

The most important thing you can do for an author you’d like to support is leave a customer review for them on Goodreads, Amazon or any of the other retailer websites.

3 thoughts on “An Interview with Christopher Rice”