Naturally, I had to know what all the fuss was about.

I have a love-hate relationship with sci-fi. Often it’s too technical with not enough story, or has a great story but the science holds no water. The Martian had a great balance of both. Weir’s love of his subject matter came through with such passion, as the hero, Mark Watney, has to keep his cool (not literally; Mars is quite cold), stranded on Mars, by figuring out creative ways to manipulate his environment and the variables within. Watney’s ability to see and inject humor into his situation helps him as much as knowing how to work with hydrogen and plutonium without blowing himself back into orbit. Even if the science isn’t your thing, you’ll get excited right alongside Mark as he MacGuyver’s all the tools at his disposal. The dialogue, both in Mark’s journal and as he corresponds with NASA, had me roaring. Fantastic read that will easily be found among the sci-fi classics in the future.

My reviews of the individual titles are below.

Wayward Pines is everything I expected, and nothing like what I expected. The cross of multiple genres- thriller, horror, sci-fi, dystopian- is so finely woven together that you never get genre whiplash. The narrative moves quickly- so quickly I read it over one evening and a short plane ride. And while this particular theory/idea has been tackled before, Crouch adds his own unique spins and twists so that Wayward Pines stands well on its own. Quick, thrilling, and well-spun. I immediately picked up the second book.

Fantastic second book in the trilogy. Not a moment of downtime from a racing heartbeat, and a sense of anxious anticipation. I had no idea how it was going to go, or end, possibly because of Crouch’s ability to keep the reader in the NOW. Getting ready to dig into the third book tonight. I haven’t been this riveted to the page in a long time.

Overall, I really enjoyed this series. Read all three books in three days, which is quick for me. I stayed up late into the night, all three nights. and immediately picked up a few more of Crouch’s books. As a series, I would score it a 4.5, but am giving this book 4, largely because it has the designation of the book that either resolves things, or doesn’t. Having read on Crouch’s website that he doesn’t plan to write a fourth book, I have to assume this is where the story ends.

Problem areas for me:

–> The story was too short for so much ground that needed to be covered. A lot of that page time felt wasted by unnecessary flashbacks (telling us things we already know), and a very long battle sequence that could have been cut in half– or the story elongated.
–> Dialogue, for some reason, leaned on the cheesy side, especially the conversations where the love triangle elements were involved. In another book I might not have noticed, but Crouch’s writing is so strong otherwise that some of the exchanges took me out of the story momentarily. I also couldn’t help but feeling a second love triangle was unnecessary, given all the other odds and threads, but it did at least serve the purpose of explaining how Ethan got there in the first place.
–> Some missed opportunities: Adam’s experiences, while teased at being the key to their survival as a race, ended up being a red herring. More emphasis should have been given to the fact, though, that a dude survived four years beyond the gate!

Like the other books, The Last Town was fast-paced and I imagine some will disagree, but I liked the ending. I actually didn’t guess that was Ethan’s intention until the moment was upon me, and, given this is the last book, this is probably the best choice for where to leave it. And kudos for the shortest epilogue I’ve ever read in a book. It’s technically a cliffhanger, though, given the implications nearing the final pages, it could also be seen as a great conclusion.

Few authors have tackled the folk tale/fairy tale reboots with the finesse of Gregory Maguire in the Wicked Years series. Wicked remains one of the most influential books of my generation, and the rest of the series, while not packing nearly the punch of the first book, nevertheless delivers an adventure that is as much exciting as it is thought-provoking.

My reviews of the individual titles are below. 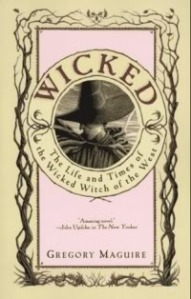 I first read Wicked years ago, not long after it came out. Then again, recently, after having the pleasure of seeing Wicked at the Apollo Victoria in London.

On my first read, I’d been expecting a fractured fairytale, and was shocked to find this well-fleshed geopolitical tale of characters and peoples who felt more real than the originals they were based on. Maguire’s clever, humorous, and vivid prose captivated me through every page, and I was changed by the time the book ended.

The second time, myself older now, I picked up on even more of the carefully constructed nuance and thematics. Elphaba and Glinda were not your typical heroines, in any way, but you want them both to push through. The treatment of characters like Dorothy are spot-on, if unflattering. Other characters, like Fiyero, Nessarose, Nanny, and so on, added extra dimension to the story without weighing it down.

Maguire’s Oz, above all, is a world I would return to over and over. Like Middle-Earth. Like Narnia, or Hogwarts.

I don’t say this lightly, but Wicked is a true work of art. One of my favorite books of all time.

Son of a Witch 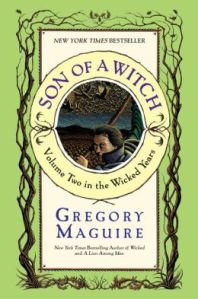 Wicked is an incredibly tough act to follow. With Elphaba gone, I didn’t have high hopes for the other characters to carry the story, namely Liir, whose characterization in Wicked was neither flattering or particularly interesting.

I was surprised to find I enjoyed watching Liir’s growth. While he never quite reaches a full hero’s arc, he most definitely morphs out of dumpy, sullen child of Wicked. And without giving anything away, his relationship with the Birds is one of the best of the series.

Of the four Oz books, I would rate this one 2nd (behind Wicked).

A Lion Among Men

When I saw this book primarily focused on the Cowardly Lion, I wasn’t real amped to read it. Especially after the state we left Liir in, in Son of a Witch. It felt like an unneeded stall in the series, for a character I never much cared about (in either print or screen). Brr’s banter with Yackle is unnecessarily drawn out through the entire book, leaving the story I was more interested in to be resolved much later. And, frankly, Brr’s exploits weren’t terribly interesting, nor did they serve to make him more likable.

In spite of all that, though, something about the book not only kept me reading, but kept me thinking about the book even when I wasn’t reading. Perhaps it was the familiar world, or Maguire’s fantastic writing (some of my favorite around). So, although this is my least favorite of the series, I still enjoyed its placement in the world. 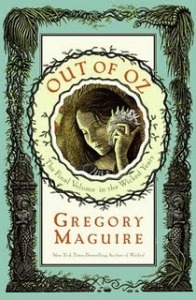 When I put this book down, I was angry. My gut-reaction complaints: the book was about 1/3 too long, the characters spend the entire book in a state of angst, the ending was… well, I don’t know, what the hell was it?

Within an hour, I was already missing the world. The characters. The language.

My challenges with the book, even with that time, still stand. Unlike Elphaba and Glinda, our new heroes don’t have many redeeming qualities. While Elphaba was often not very personable and had her share of faults, her moral compass was tilted in a way we could relate to, and she dedicated her life to it. Liir, while a better character than earlier in the series, has so little to offer. The rest of the characters alternate between outright moody and sarcastic. The character of Rain, whom I believe was intended to be the next incarnation of Elphaba, falls flat due to being generally unlikeable.

That said, I enjoyed her friendship and eventual relationship with Tip, though I was disappointed where they left it. Love, when true, sees past the barrier they found between them.

I also, as always, enjoyed simply being in Oz, and being involved in her politics, no matter how muddy, and her people, who are as familiar as family.

The ending… so many have commented on this, so I’ll only say that while I can appreciate an ambiguous, or artistic ending (I’m in the minority of folks who loved the end to The Sopranos), it left far more questions than answers, and unless he’s planning a fifth book, I’m not sure I’ll ever be able to call it satisfying.

Overall, I would rank this third (behind Wicked and Son of a Witch, ahead of Lion Among Men).

St. Charles at Dusk started as a standalone story, but since then I have written several additional stories about the two central families, the Sullivans and Deschanels. This has turned into a series, The House of Crimson and Clover, and I am currently working on editing the second book, The Storm and the Darkness for publication in 2013. END_OF_DOCUMENT_TOKEN_TO_BE_REPLACED

St. Charles at Dusk started as a standalone story, but since then I have written several additional stories about the two central families, the Sullivans and Deschanels. This has turned into a series, The House of Crimson and Clover, and I am currently working on editing the second book, The Storm and the Darkness for publication in 2013. END_OF_DOCUMENT_TOKEN_TO_BE_REPLACED

St. Charles at Dusk started as a standalone story, but since then I have written several additional stories about the two central families, the Sullivans and Deschanels. This has turned into a series, The House of Crimson and Clover, and I am currently working on editing the second book, The Storm and the Darkness for publication in 2013. END_OF_DOCUMENT_TOKEN_TO_BE_REPLACED

In September of 2011, I self-published my first novel, St. Charles at Dusk. This year I have also submitted it for the Amazon Breakthrough Novel Award. You can read more about the series here.

St. Charles at Dusk started as a standalone story, but since then I have written several additional stories about the two central families, the Sullivans and Deschanels. This has turned into a series, The House of Crimson and Clover, and I am currently working on editing the second book, The Storm and the Darkness for publication in 2013. END_OF_DOCUMENT_TOKEN_TO_BE_REPLACED