New Orleans. The seven Deschanel siblings live with their long-suffering mother in a historic Garden District mansion. Each of them unique. Each of them born with a gift. In some cases, a gift they wish they could give back.

When August Deschanel died, he left his wife, Irish Colleen, with more than seven children to raise. She inherited a job she was never prepared for: bringing up his heirs in a world she doesn’t understand. She’d never seen true magic, not before marrying into the most prominent-and mysterious-family in New Orleans. Now, she can’t escape it.

Irish Colleen knows a terrible secret. Her youngest, a prophet, has seen a future that is unavoidable: the Deschanels will not leave 1970 without losing one of the seven. She knows only that it will happen, but not when, how… or to whom.

One of her children must die, and Irish Colleen can do nothing to stop it.

Sarah is the USA Today bestselling author of the Paranormal Southern Gothic series, The House of Crimson & Clover, born of her combined passion for New Orleans, and the mysterious complexity of human nature. Her work has been described as rich, emotive, and highly dimensional.
An unabashed geek, Sarah enjoys studying obscure subjects like the Plantagenet and Ptolemaic dynasties, and settling debates on provocative Tolkien topics such as why the Great Eagles are not Gandalf’s personal taxi service. Passionate about travel, Sarah has visited over twenty countries collecting sparks of inspiration (though New Orleans is where her heart rests). She’s a self-professed expert at crafting original songs to sing to her very patient pets, and a seasoned professional at finding ways to humiliate herself (bonus points if it happens in public). When at home in Oregon, her husband and best friend, James, is very kind about indulging her love of fast German cars and expensive lattes.
Connect with Sarah
Official Website: http://www.sarahmcradit.com
Facebook: http://www.facebook.com/houseofcrimsonandclover
Google +: google.com/+SarahMCradit
Twitter: @thewritersarah
Instagram: @kissedbyfire31
Pinterest: https://www.pinterest.com/sarahcradit/the-house-of-crimson-and-clover/
Newsletter: http://bit.ly/1UwzVWO
Street Team: http://bit.ly/1ZRAZ7F
Review Team: http://bit.ly/1Pu9YkK
Bookbub: https://www.bookbub.com/authors/sarah-m-cradit 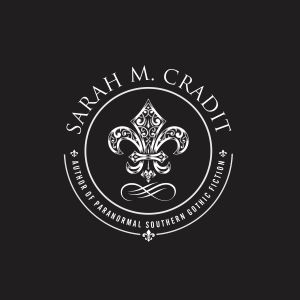