MYTHS OF MIDWINTER, the sixth volume in the bestselling Paranormal Southern Gothic series, The House of Crimson & Clover, is now available on all major online retailers.

Quillan Sullivan lost his twin brother two decades ago, a tragedy he never fully experienced due to his unusual ability to see and talk to Riley when no one else can. He believes this “gift” is a fluke, until the haughty, vainglorious love of his life, Estella, returns after several years abroad, and rips his world apart.

Estella Broussard loathes Quillan. He’s the last person on Earth she’d ever bless with her presence. To her great dismay, he alone holds the key to achieving her deepest desire. She will do anything to reach her aims, no matter the warnings… no matter the cost to Quillan.

Nerys guides Finn and Aleksandr on their mission to find Anasofiya and bring her home. Finn accepts her help, on the condition she keep no secrets. She relays what she knows… all except the visions her old companion has sent her, regarding a terrifying menace to the Deschanels back home: A necromancer has emerged, and this ominous knowledge has fallen into the wrong hands.

The threads of fate weave the Deschanels and Sullivans down perilous paths, as a centuries-old warning emerges: Seduction to sinners. A legacy in splinters. Beware, the myths of midwinter.

Need to catch up on the series first? The series prequel THE STORM AND THE DARKNESS, is on sale for $.99. This is a fantastic chance to start this bestselling paranormal series by picking up the book New York Times Bestselling author Christopher Rice calls, “modern gothic with fierce smarts.” **SALE ENDS TODAY!** 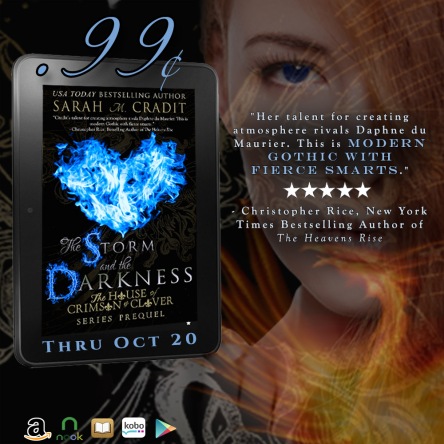 Ana Deschanel made a terrible mistake. The only chance of protecting the other people involved is to flee New Orleans, the only home she has ever known, for the quiet solitude of Summer Island.

Summer Island, Maine (population 202) is not the tranquil escape Ana imagined. The locals are distant and cold, especially her neighbor, the reclusive veterinarian Jonathan St. Andrews. Her only lifeline is the kind but odd caretaker, Alex Whitman. Showing up at all the right moments, he warns her she is completely unprepared for a Maine winter. As the first seasonal storm approaches to whispers of an island shutdown, Ana realizes she may soon be cut off from the rest of the world.

After a surprising encounter with Jonathan’s brother, Finn, Ana finds herself braving the storm to return something to him. Unprepared for the Maine storm, she slips and falls onto the jagged rocks along the shore. The St. Andrews brothers find her in the nick of time, but she remains unconscious. As the storm worsens, the St. Andrews brothers learn there are other, more sinister forces at work closer than they ever imagined.

With no help from the outside world, they must find a way to protect themselves from both the storm, and the growing darkness that looms across the island.

4 thoughts on “Myths of Midwinter is HERE!”