Yesterday, I received an email from Amazon with a link to the names of all the authors/books who had made it through the first round of cuts for the Amazon Breakthrough Novel Award. I was floored to see my name on the short list!

For those who don’t know, the ABNA contest starts with 10,000 entrants and works its way down to a final winner, for a $50,000 check and a big book contract. Now, after this first round, the contest is down to 2,000 (400 in each main category). During the quarter-finals, that list will be narrowed down even further, and so on. If you want to learn more about the contest, click here.

March 18 – Round 2 entries are announced.

The novel I entered into the contest was St. Charles at Dusk. The book is currently available on all major online retailers. Below the image, I’ve included the formal pitch I crafted for the contest submission. 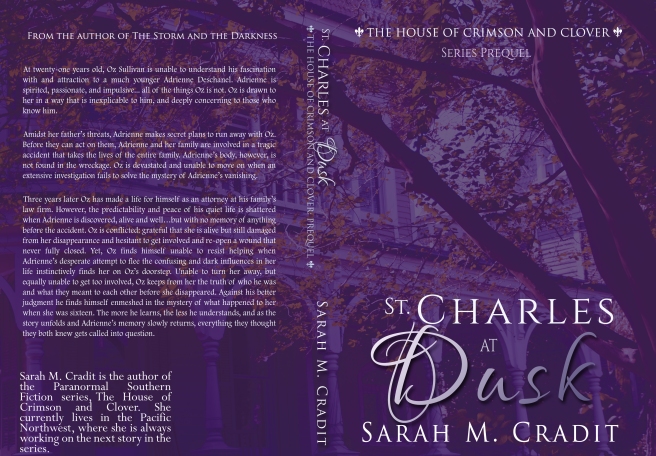 There exists a delicate dance between romance and reason. Between love and loss.

A father’s threats. A tragic accident. Unanswered questions. Oz Sullivan has finally moved past the tangled web surrounding his brief, but intense, relationship with the young, impetuous Adrienne Deschanel. Through his family, and successful career as an attorney, he has forged a tranquil predictability, sheltering him from the effect of the turbulent memories that once threatened to destroy him.

Everyone believed Adrienne Deschanel died in the bayou three years ago, with the rest of her family. Scattered dreams have given her a name, but no memory of the life she once led. Seeking answers, Adrienne and Oz re-converge under a dark shadow of lies and deception. Truth can be a cruel mistress, and understanding does not always follow. Oz’s carefully crafted world is turned upside down, as he must decide how to help her without losing himself entirely.

Oz struggles over what is right, and what seems right; caught between what the world around him will accept, and what it will, perhaps rightfully, aim to protect him from. Adrienne, brilliantly smart, thinks she knows best how to protect those she cares about. Both are misguided, resulting in consequences ranging from messy, to catastrophic.

Revealed through an artfully done tandem timeline, and supported by a rich cast of vibrant characters, the painful truth is exposed, one layer at a time. Journey through love and regret, sharing in the discovery that a careful and orderly illusion is not the same as true happiness.

Set amidst the lush and vibrant backdrop of New Orleans, St. Charles at Dusk tells the sumptuous story of Oz and Adrienne; of forbidden love, and startling heartbreak.