I am pleased to welcome Becket, author of The Blood Vivicanti, for an interview. You may be most familiar with Becket on his Facebook page, where he talks about his job as Anne Rice’s personal assistant, his awe-inspiring years living in a New Orleans monastery, and his love of everything geek. Now, Becket can add “author” to his list of life experiences as he introduces us to the first of six installments in the serial novel, The Blood Vivicanti. The serial involves an entirely new and unique set of blood-drinkers, which were born of a collaboration between Becket and Anne Rice.

I hope you enjoy my interview with the charming and lovely Becket, who, on top of everything else, is just an all-around awesome guy to chat with. And thank you, Becket, for stopping by!

Stay tuned after the interview for my review of The Blood Vivicanti, as well as links where you can connect with Becket online.

12 Questions with Becket, Author of The Blood Vivicanti 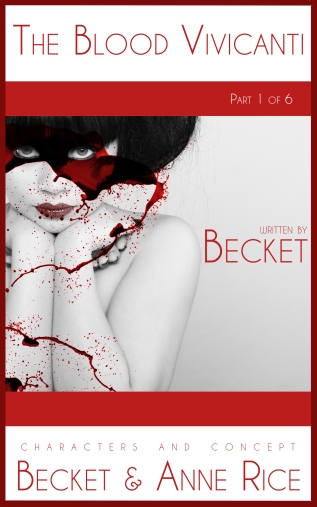 1. The book introduces a new and unique race of blood drinkers. What can you tell us about this new race, the Blood Vivicanti?

If you look at classical works like Bram Stoker’s Dracula, Le Fanu’s Carmilla, and Polidori’s Vampyre, you do not see the problem in most blood drinker tales today, which is a super-abundance of supernatural creatures.  What Anne and I did was return to a mindset like the classics: A few supernatural creatures trying to go unnoticed in a society upon which they feed.

Part 1 starts off with only three Blood Vivicanti in the whole world, and Mary Paige, the heroine of this story, is the latest and youngest.

2. Mary Paige is a classic introvert, and I expect her upbringing will really speak to other introverts. Where did you pull her experiences from?

I pulled her experiences from two places.  First: Yes, I am a classic introvert as well; although I think I’m a little more introverted than she is, if that’s possible.

I have painful memories of walking to the school cafeteria, as though it were death row, knowing that I had a few friends, yet none had that lunch period.

But I also have an MS in psychology.  And many of the experiences I write about in all my books come from my education.

3. The characters were a collaboration of yourself and Anne Rice. How did that process play out?

For many months we swapped emails and had meals together.  During that time we talked about characters and their supernatural abilities.  On a plane back from England once, we were trading notes over the seats about the narrative.

The story took many shapes from 2011 until now.  Finally I suggested the idea of serializing it, the way Dickens did with his novels.  Anne was thrilled about the idea.

4. Your descriptions in the book are both simple and colorful at once. Other than Anne Rice, what other authors have inspired and influenced your writing?

Thank you!  Of course a reader who becomes an author has the narrative voices of several narrative styles swirling around their heads.  It might not look like it, but I’m still heavily influenced by Virginia Woolf and Shakespeare.  The color of their words and the turns of their phrases are always in my head.

However, my more contemporary influences — the books at hand for my daily literary refueling — would be Hemingway, McCarthy, Vonnegut, and even the simple declarative prose of many bible stories.

But I’m also greatly influenced by haikus and the poetry of Mary Oliver and W.S. Merwin.

So I guess you could say that prose and poetry both influence me.

5. Obviously, you have the coolest job in the world. What’s a typical day like for you?

Well, there is no typical day.  Today, for instance, I helped Anne sell her Rolls Royce, fixed a problem on her computer, discussed with her our upcoming trip to Canada and France, swapped emails with Juliet Landau about possibly interviewing Anne before that trip, and relayed messages from Anne to her agents, among other things.

Tomorrow, I’ll follow up on these projects, but, honestly, anything could happen.

6. The Blood Vivicanti is self-published. What made you decide to explore the indie publishing route?

It wasn’t an easy decision.  Ever since college, long before I started working for Anne, I dreamed of being published by a major house.  At that time, Amazon was still a start-up business, and indie authors didn’t have awesome sobriquets like “indie”.  In fact there seemed to be a stigma on any author who self-published.

7. What have you learned so far about the indie publishing process? How did it compare/contrast with your expectations?

The most important thing I’ve learned about indie publishing is that we are a great community.  Indie authors really stick together and support one another.  I’ve become good friends with you, Sarah, as well as with Greg Wilkey, and also great editors like Todd Barselow.  Getting a chance to read your book and Greg’s, as well as to utilize Todd’s great editing skills, has been rewarding enough.

This alone has far exceeded my expectations.  Before I got into indie publishing, I thought I was going to be a lone voice crying out in the wilderness.  But we all stick together and read one another’s books.  We support one another and tell other people about our work.  We are our own marketing division.

8. Aside from the future releases of The Blood Vivicanti, you have two other projects upcoming: a children’s book, Key the Steampunk Vampire Girl, as well as a spiritual novel. What can you tell us about these?

KEY THE STEAMPUNK VAMPIRE GIRL is actually going to be my first whole book, considering that the Blood Vivicanti is actually a serial.

The story is about a nine-year-old girl who is turned into a vampire.  She loses her mom and dad.  She is taken to live in The City of the Dead, where she is imprisoned for many years in the dungeon.  But she finds great friendship with a ghost, a witch, and an immortal puppy who morphs into a 12-foot tall wolf.

The more spiritual book is titled: THE DOOR TO HEAVEN.  It’s about a boy, Dominic, and a girl, Pascala.  He loses his dad at a young age.  She loses her mom too.  He copes when he starts interacting with the Door to Heaven.  She copes when she draws closer to him with the help of her guardian angel.  It’s a tale of discovery for Dominic and Pascala, as they learn the secret places where the Door to Heaven hides.

9. On your Facebook page, you’ve graciously shared your experience of spending several years in a New Orleans monastery. Do you ever plan to publish stories based on this?

I have been saving all my posts about my monastic experience.  I have just over 10,000 words.  I write about 1000 words each post, sometimes a little shorter, sometimes a little longer.  I’m thinking that, after 5 or 10 more posts on the monastic life, I might compile them together into a little book.

10. You’re a Whovian, and a self-professed geek, which many of your readers can relate to. Settle the debate for us: Star Wars or Star Trek?

For me, the two universes can’t be divided — besides: Star Wars happened “A long time ago in a galaxy far, far away…” while the original Star Trek series is a long time from now in the Milky Way.  Who says they can’t happen along the same time line?

You see: The two played entirely different roles in my upbringing.  In THE BLOOD VIVICANTI Part 2, I’ve given an aspect of myself to a character named Wyn.  He’s the scientist who created the Blood Vivicanti.  Wyn’s not me; and I’m not him; but I have let him have a part of me for his character’s motivation.  The line goes: “He watched Star Trek to appreciate literature and logic, art and music and hope for the future. He watched Star Wars to consider a power greater than himself.”

For me this is very true.  Star Trek helped my love for culture to grow: They were always talking about books and music.  A literary theme of the Wrath of Khan, for instance, is Moby Dick.  All throughout the movie they’re quoting Ahab’s lines.  And the TV shows had music and Shakespeare and literature.  It was wonderful.

Star Wars, on the other hand, namely The Empire Strikes Back, is metaphysically oriented.  There are great discussions about the mystical elements of The Force – how we’re all connected in some special way to an unseen power that is both terrible and gentle.

11. The next installment in The Blood Vivicanti is out in a few weeks. What’s next for Mary Paige?

In Part 2 of THE BLOOD VIVICANTI, Mary Paige is introduced to Wyn and to her new life as a blood drinker.  Throughout her human life, neither parent nor peer taught her to trust herself.  So she never accustomed to seeing herself as a powerful woman. In Part 2 she says: “Life had taught me thus far to avoid looking at my own power… I couldn’t see how powerful I’d become.”

The whole series is about the slippery slope of self-discovery, and in Part 2, Mary Paige deals with finding people who believe in her.

12. Finally, is there anything else you’d like readers to know?

Everyone should go out and buy one!

The Blood Vivicanti introduces readers to an entirely new and unique kind of blood-drinker; this is not your run-of-the-mill sparkly vampire, or your gothic, romantic predator. Becket’s Blood Vivicanti are a refreshingly new take on an old concept, and from the very first lines of the story, I was drawn in and swept away in the world he creates.

The story introduces us to Mary Paige, whose struggles with being a misunderstood introvert will resonate with all of us who have reserved thoughts or words from others for fear of not being accepted. Her experiences are relatable, painful, and often humorously familiar, as Becket weaves in references that are expertly placed, and effortlessly enjoyed by the reader.

Mary Paige’s voice is clear throughout. Her struggles and insights feel real. Though you know the installment will end with her induction into the Blood Vivicanti, it is, nonetheless, a moment that leaves you breathless right up until the final words.

While Anne Rice’s contributions to the story are clearly felt, the voice is uniquely Becket’s. His writing is concice, descriptive, and sometimes hauntingly in-your-face. He does not just paint you a picture of his world, he pulls you into it with both hands.

The Blood Vivicanti is expertly done, and I cannot wait for the second installment.

16 thoughts on “An Interview with Becket, Author of The Blood Vivicanti”